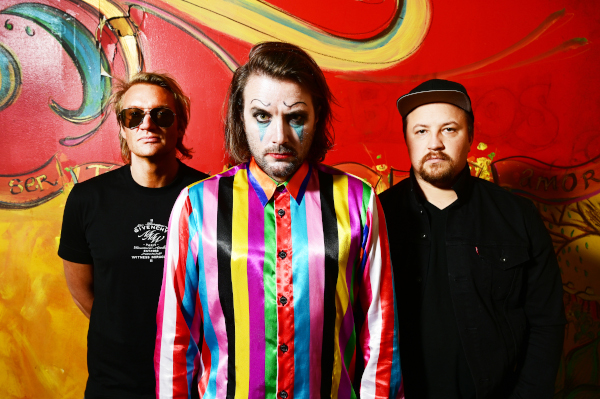 END_OF_DOCUMENT_TOKEN_TO_BE_REPLACED

One of the most exhilarating new forces on the global rock scene, Capital Theatre create the rare kind of rock music that triggers both raw catharsis and intense reflection. In the making of their debut album A Hero’s Journey, the New Zealand-based trio mined inspiration from Joseph Campbell’s The Hero with a Thousand Faces, using that seminal study of the archetypal hero as a lens for exploring the human condition in chaotic times. Made with legendary producer Mike Clink (Guns N’ Roses, Megadeth, Steve Vai), the result is a truly singular body of work, powerfully illuminating yet viscerally thrilling.

“The hero’s journey is the blueprint for so many great stories of our time, and so we decided to map out the album based on that framework,” says Capital Theatre frontman Adam Stevenson. “It begins at the status quo, then moves through coming-of-age and the call to adventure, the trials and tribulations and then finally the moment of triumph over adversity. It was such rich territory to write against, and ended up giving us this amazing template for examining the human experience.”

All throughout A Hero’s Journey, Capital Theatre set that examination to a supremely hard-hitting sound. Mainly recorded at the famed NRG Recording Studios in Los Angeles, the album draws much of its gritty vitality from guitarist Roy Oliver’s electrifying solos and sequences, including a number of guitar parts recorded at Slash’s own Snakepit Studio. From song to song, the band reveals the undeniable chemistry they honed through years of playing local pubs back home in Auckland, with A-list guest musicians like Jane’s Addiction bassist Chris Chaney, Bon Jovi lead guitarist Phil X, and Spinal Tap keyboardist C.J. Vanston endlessly intensifying the album’s frenetic power. But while each track embodies an unbridled energy, Capital Theatre also embedded A Hero’s Journey with plenty of unexpected and immaculately crafted details: Stevenson’s graceful and soul-stirring piano work, the cinematic string arrangements of David Campbell (a composer who’s worked with the likes of The Rolling Stones, U2, and Beck). “We really took our time creating a whole world around every song, and made sure the music had a very epic feel to it,” says Stevenson. “We wanted the listener to feel like they’re going on a bit of a quest as well.”

The explosive opening track to A Hero’s Journey, “Fait Accompli” begins on a brilliant and blistering note, unfolding in kinetic synth tones, snarling guitar riffs, and the furiously pounding rhythms of drummer Paul Reid. As the track takes on a wild velocity—building to a luminous piano interlude at the bridge—Capital Theatre present a deeply personal portrait of the trauma of birth. “That song’s about the fact that we’re thrown into this world without a choice—it’s a fait accompli for everyone,” says Stevenson. “The lyrics are partly observational, but it’s also referring to how my first daughter was born prematurely in an emergency kind of scenario, and how terrifying that experience was.”

From there, A Hero’s Journey veers into the untamed urgency of “People” and its galvanizing social critique. “‘People’ is meant to show what everyday life is like in the world of the hero’s journey, which we turned into commentary on the capitalist structure and how the divide between rich and poor has never been so extreme,” says Stevenson. “We all have to go out and earn money in order to survive—which sometimes means compromising what you believe, or being forced into doing things you don’t want to.” With its lyrics poetically capturing today’s societal ills (e.g., “The addiction to the fiction makes the truth so hard to find/The characters we play are changing all the time”), “People” also boldly defies standard song format in its lack of a repeating chorus. “In the first version we had a chorus that would’ve been catchy as hell, but the way the song evolved feels much more true to who we are,” Oliver points out.

One of the most piano-heavy and triumphant tracks on A Hero’s Journey, “Long Way to Fall” channels a heavy-hearted determination in its rumination on courage and risk. “‘Long Way to Fall’ is about answering the call to adventure,” says Stevenson. “It’s that moment when the hero says, ‘I understand the consequences and the danger, but I’m still going to go out and try.’” Elsewhere on the album, Capital Theatre touch on everything from the enchantment of temptation (on the disarmingly tender “Fire”) to toxic tribalism and the unraveling of American society (on “Force to Fight,” Capital Theatre’s combustible debut single). And on “Save a Stranger,” A Hero’s Journey closes out with an anthemic meditation on self-sacrifice. “Joseph Campbell has an anecdote about two police officers and a person attempting suicide, and how when that person went to jump, one of the officers instinctively grabbed him,” says Stevenson. “The officer nearly went over the cliff himself, but his partner managed to pull him to safety. I was really struck by the idea that the officer forewent all logical reason in that instant, and nearly lost his life to save someone he didn’t even know.”

For Capital Theatre, the decision to end on “Save a Stranger” speaks to a certain idealistic spirit infused into the album, even at moments when the outlook is incredibly dire. “At the end of the journey, the hero is supposed to return with some sort of answer, a piece of wisdom to bestow on the society that created him,” says Stevenson. “I think that wisdom is within the story we based ‘Save a Stranger’ on, which really sums up the best of who we are as a species. It’s saying that no matter how different or divided we may believe ourselves to be, the truth is that we’re inherently connected. We are all inherently one being.”