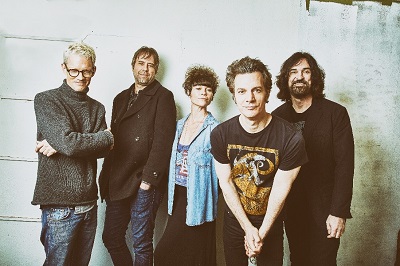 END_OF_DOCUMENT_TOKEN_TO_BE_REPLACED

Nothing kickstarts a conversation quite like a song does.

Rock ‘n’ roll customarily stirs up dialogue and discourse, and SONS OF SILVER carry on this tradition by way of rip-roaring riffs, bluesy rhythms and provocatively poetic lyrics. The Los Angeles independent alternative rock band–Peter Argyropoulos [vocals, guitar], Brina Kabler [keys, vocals], Kevin Haaland [lead guitar], Adam Kury [bass] and Dave Krusen [drums]–consistently get critics and fans talking.  Under the previous name of Peter RG, the group built a catalog of two EPS–Lightning Strikes [2016] and Reaching for the Moon [2016]–and the 2017 full-length Tender Souls. Recharged as SONS OF SILVER in 2019, they served up the singles “Never Enough” and “Down,” which BraveWords called “one of their most introspective and hook-laden songs to date.”  In between canvasing North America and Europe on tour, they attracted further acclaim from The Hype Magazine, Vents Magazine and more.

In 2020, they soundtrack the times with the Rude Awakenings EP.

“I want people to challenge me, and I want to challenge others,” Peter enthuses. “I sing about this in our songs. Many people are very close-minded and focused on a personal agenda with one way of thinking and  not open to other opinions. However, we evolve as a civilization by sharing opinions and respecting ideas we might initially disagree on.”

By cementing their own union, SONS OF SILVER built a platform for a universal discussion. Logging nearly 80 shows per year, the musicians collaborated more than ever back in the studio. This time around, songs spun off from jam sessions as a unit and the writing process relied on their  musical interplay.

“After playing live so much, we started collaborating more to the point where all of these songs were written together,” he continues.  “That was new for us, and it was exciting. Songs came out naturally from these jam sessions. We’d sit in the studio, noodle on ideas, and finish the base of a song in 30 minutes. We didn’t have to plan it out.”

The group heralded Rude Awakenings with the simmering and swaggering punch of “Read ‘Em Their Rights” and the infectiously incendiary “World On Fire.” Meanwhile, the 2020 single and title track “Rude Awakenings” slithers along on a wild riff and hypnotic beat as Peter’s soulful delivery takes hold. It culminates with a captivating chant punctuated by a wah-wah solo and his gruff intonation of the line, “I’m gonna hurt somebody now.”

“We’re awakening to a changing world that has become much more venomous, harsh, bitter and accusatory,” Peter sighs. “At the same time, everyone is pushing an agenda down the throats of others in a bloodthirsty way. With the global pandemic, the title feels appropriate.”

“Outbreak” stomps along on jagged distortion and a gruff groove before another hard-hitting howl. “It’s about a paranoid person’s reaction to what’s happening in the world,” he continues. “If you watch the mainstream news channels every day and browse headlines, you’ll get freaked out. You reach a point of being so overwhelmed you stop caring to hear it.”

Clean guitar resounds at the top of “Deep Division” as it slips into a hypnotic refrain. Peter adds, “It’s about the left-right split we’re experiencing in this country. I wrote it from a more personal perspective in terms of a relationship–seeing a great divide between two people. However, there’s a positive spin that, ‘Everything’s going to be alright in the end.’”

In the end, SONS OF SILVER ignite a conversation as loudly as possible with Rude Awakenings.

“When you listen to this, I hope you enjoy it, first and foremost,” Peter concludes. “Likewise, I also hope it raises awareness on our standing in life in general and how we treat the opinions of others and treat each other. I’d love to improve our interactions with society. Maybe you become more engaged with the world you live in–from your family to your neighborhood to your city to your state and to your country. Perhaps, you’re willing to speak up a bit more. I believe in the collective voice. It’s generally the wisest.”