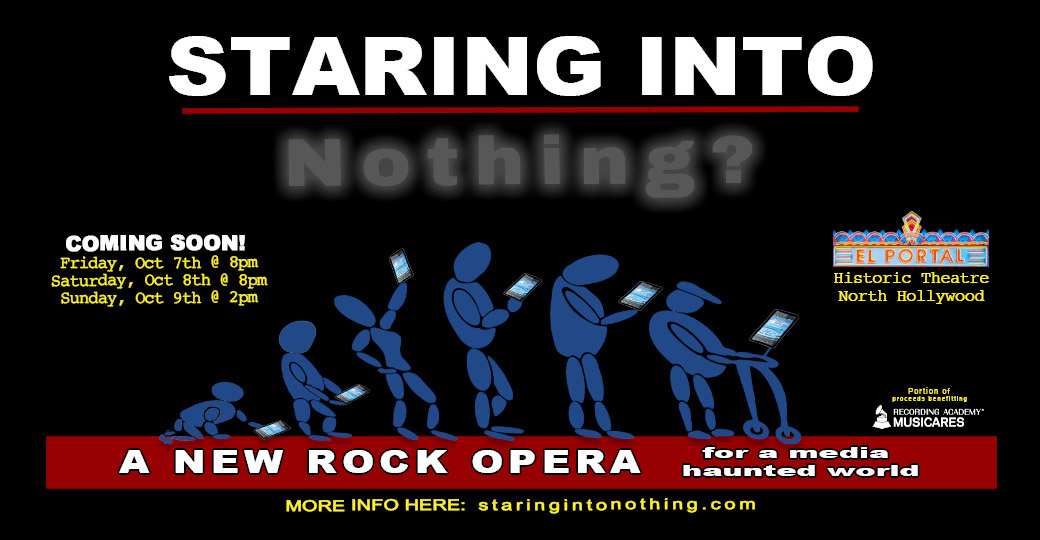 DATE: SEPTEMBER 29, 2022 FROM: MARCEE RONDAN “STARING INTO NOTHING?” NEW MUSICAL/ROCK OPERA BRINGS TOGETHER WIDE-RANGING CAST FOR FRIDAY, OCTOBER 7 DEBUT AT THE EL PORTAL THEATRE IN THE NOHO […]

END_OF_DOCUMENT_TOKEN_TO_BE_REPLACED

DATE: AUGUST 25, 2022 FROM: MARCEE RONDAN “STARING INTO NOTHING,” THE NEW MUSICAL/ROCK OPERA, SET TO DEBUT FRIDAY, OCTOBER 7 AT THE EL PORTAL THEATRE IN THE NOHO AREA OF […]

END_OF_DOCUMENT_TOKEN_TO_BE_REPLACED

STARING INTO NOTHING
FULL CAST AND CREW

About Steven Rogers:  After a career in business as an accountant with Ernst & Young and then as CEO with K&N Air Filters, Steve Rogers hung up his spurs and decided to get an honest job as a musician and composer.  Beginning at the age of 14, Steve had the benefit of being trained in piano, harmony, and theory from an old-time improvisational jazz pianists and throughout his life (as a family man and businessman), Steve always kept playing the piano.  That training–coupled with a lifelong love of music and books–made Steve a perfect partner for the progressive- oriented Kurt Barabas.  Steve contributes all keyboards, song lyrics and story concepts for STARING INTO NOTHING.

About Kurt Barabas:  Kurt Barabas was formerly a Magna Carta recording artist with the band Under the Sun who released a critically acclaimed debut album featuring the single “Seeing Eye God.” With the departure of all other band members, Under the Sun broke up while recording their second album. Kurt was then a member of Amaran’s Plight with Nick DiVirgilio, Gary Wehrkamp, and DC Cooper. Next, Kurt was a founding member of Roswell 6 who recorded the album Terra Incognita that accompanied a science fiction novel of the same name written by Kevin J. Anderson. Terra Incognita featured lyrics by Kevin Anderson and a who’s who of musicians including Kurt Barabas, James LaBrie, Michael Sadler, John Payne, Eric Norlander, Lana Lane and David Ragsdale.

DENNY FONGHEISER:  Whether playing, producing, remixing or arranging, Denny Fongheiser focuses on embracing a great song and bringing out the best in each artist.  Throughout his career, he has played on countless multi-platinum, Grammy, Oscar and Emmy winning recordings including Tracy Chapman, Seal, Counting Crows, Roger Waters, Trixter, along with movie soundtracks for “Lion King” and “La Bamba”. On the live front, Denny has toured the world many-timesover with some of the top artists in music including Heart, John Paul Jones/Diamanda Galas and Belinda Carlisle, among others.  He’s not only produced, arranged, composed and re-mixed tracks, but he’s also written and arranged music for national TV and radio spots.  For “Staring Into Nothing,” Denny will serve as Producer, Musical Director, Drums, Percussion.

About Jeffrey Polk: As a native Californian, Jeffrey Polk has traveled the world, performing, directing, teaching, and enjoying life.  He has worked with Berry Gordy, Mike Stoller, the late Jerry Leiber, Stevie Wonder, and Patrice Rushen, and a host of others directing shows and concerts.  He’s performed on Broadway, appeared in national Broadway tours, and made various appearances on television and in films.  He’s a SDC member (#nothingbutloveforevery1).  Polk most recently directed “Memphis (The Musical)” at Moonlight Stage Productions and “In The Heights” in Dayton, Ohio. Jonathan Bluth is a singer/songwriter/producer from L.A., now based in NYC. His first single ’24/7′ under his artist project (BLUTH) received a Grand Prize in the John Lennon Song Contest which was nominated for a Hollywood Music in Media Award. His songs can be heard in advertising, television, podcasts and films. His love for musical theatre started at a young age. Favorite roles include Mark Cohen in Rent, Cousin Kevin in Tommy, and Joseph in Joseph and the Amazing Technicolor Dreamcoat.

Marqell Edward Clayton is an African American actor, singer, and dancer who has performed across North America. A few of his favorite credits include: the pre-Broadway tour of Ain’t Too Proud the Life and Times of the Temptations,

Brentley Gore is a Nashville native. During his early years, he was a performer at the Tennessee Performing Arts Center and selected to attend the Tennessee Governor’s School for The Arts. Following high school, Brentley attended the North Carolina School for the Arts and graduated from the prestigious American Musical and Dramatic Academy in New York City. Upon graduation, Brentley moved to Los Angeles and took on the lead role in the NBC situational comedy TV show California Dreams which was syndicated in over 48 countries and made him a teen star. Following the TV show, he won the Ovation Award for the off Broadway musical The Fantasticks (Ken Page Director), wrote and recorded multiple records and toured as a male solo artist and also as a founding member of the band King Straggler.  Brentley has involved himself in many nonperforming creative jobs within the entertainment industry. He founded the 501(c)(3) non profit, Los Angeles Performing Arts Foundation.  He spent some time as a professor teaching performance and songcraft at The American Musical and Dramatic Academy in Los Angeles. Recently, Brentley served as the director for two Nashville stages; The Pepsi Studio Gallery and Music City Tippler, securing talent and managing production.

Janaya Mahealani Jones’ (She/Her/They/Them) credits include Felicia Farrell in Memphis,  Esmeralda in The Hunchback of Notre Dame,  Belle in Team Starkid’s VHS Christmas Carol, Sampson in Pat Benatar and Neil Giraldo’s Invincible the Musical, and Stanley Uris/Henry Bowers in the award-winning production of The Rockwell Musical Parody of Stephen King’s It. She has been seen at theatres across southern California such as The Old Globe, San Diego Musical Theatre, Lamb’s Players, Performance Riverside, Rockwell Table and Stage, The Bourbon Room, and virtually with After Hours Theatre Company. When she is not doing regional theatre, Janaya performs with the Five and Dime Jazz Band and The Disney Junior Dance Party at Disney’s California Adventure.  Follow Janaya’s journey on social media: @esmerelduhhh_

Amanda has been seen on The Fresh Beat Band (Nick Jr.) and 90210 (The CW) as well as performing in the Edinburgh and New York Fringe festivals. They performed regularly at Rockwell Table and stage in their famed unauthorized musical parody series and continue to perform with Cherry Poppins musical burlesque company.  Most recently they appeared as Henrik in A Little Night Music at Greenway Court in Los Angeles produced by Knot Free Productions. They have also stepped into producing for Celebration Theatre and this past summer participated in the Hollywood Fringe with their production Tales of the Transcestors, a devised piece performed and written exclusively by trans and gender expansive performers, Tales of the Trancestors was nominated for Best Cabaret or Variety show and won Best of the Broadwater at the 2022 Hollywood Fringe Festival.

Ginny Luke is a recording artist recently signed to KZZ Music/Sony Orchard.  She’s a classically trained acoustic and electric violinist playing since the age of three; and a pop/rock songwriter and string arranger for artists such as J.Cole, Ava Max, Amber Mark, Niia, G-Eazy, and others.  Ginny has recorded and toured with major artists such as the Foo Fighters, Shawn Mendes, Nicki Minaj, Britney Spears, Black Eyed Peas, Meat Loaf, Avril Lavigne, Ashe, Finneas, and many more.  Her work (featured violin and vocals) has been featured on notable tours including Meat Loaf, Questlove’s 4UPrince Symphonic Tour, Dr. Dre Orchestral Rendition Tour.  She’s performed at Carnegie Hall and Disney Hall on television and awards shows (the Latin Grammys, Today Show, Late Night with Seth Meyers, The Tonight Show with Jay Leno and the American Music Awards (2014, 2016). Ginny is currently on faculty at University of Southern California Thornton School of Music teaching Pop Strings.  Her favorite performance experiences include singing lead vocals and violin at Royal Albert Hall with the 4UPrince tour, performing in Sydney at the Australian Football League Grand Final with Meat Loaf, and performing alongside Ricky Martin with her string group SAGA Strings at the Latin Grammys.

Will Riddle (he/him) is a Los Angeles native and a fifth generation actor and musician.  Since the age of nine, he has performed as a session singer, lead guitarist (appearing on the debut record Into the Night from L.A. band LAROCA LAROCA), and as a voice over artist for PBS. Previous roles include an award winning turn as Buddy Holly in The Buddy Holly Story, Lord Farquaad in Shrek The Musical, and Colin in Elsewhere, (original cast album available on all music streaming platforms). Socials: @will_riddle_

Originally from Chicago, Scott has lived across several states, training in many dance styles including ballet, tap, and jazz. After graduating from high school in Texas, he made the big move to California. Traveling around the world for six years he has seen, met and walked the lifestyle of so many different cultures and people, learning to never take what you have for granted, but to also never settle for less than you are. You can find him performing, choreographing, and spreading love and joy all over Southern California.  He has been in the industry professional for the past decade working with Post Malone, Patti Wilcox, Leslie Stevens and many other incredible people.  You can keep up with Scott on Instagram @scottspraags

Adam has worked in Los Angeles and Nashville with groups across many different genres, and can be heard on soundtracks with CBS, USA, EA Games and more, working with composers such as Giorgio Moroder and Raney Shockne, as well as being featured on tracks with artists including Stevie Wonder and Nick Cannon. He can be seen working with artists such as 3OH!3, Keith St. John, Tom Yankton, Lalo Davila and Orkestra Cubana, as well as top 80s and 90s tribute bands.

Composer and veteran record producer Derek Nakamoto has over 40 years of experience in the recording industry. His work can be heard on numerous albums by industry icons, such as Michael Bolton, New Order, and the Jacksons. He has arranged over 20 albums for contemporary jazz pianist Keiko Matsui and produced albums for Teddy Pendergrass, The O’Jays, and Angolan icon Waldemar Bastos. Recent works include scores for films Norman Mineta and His Legacy featured on PBS and 100 Years from Mississippi. He produced Nobuko Miyamoto’s newest release, 120,000 Stories, for the Smithsonian/Folkways Records.

Music audiences around the world have seen Janet Robin’s incredible guitar work as a former touring member of the Lindsey Buckingham Band (from Fleetwood Mac), Meredith Brooks, Air Supply, and many other international touring artists. In 2018, Guitar Player magazine named her as of one of the “Top 20 Rock/Songwriter Acoustic Guitar Players” and Guitar World magazine listed her as one of the “Top 10 Female Guitarists.”  Janet has been a guitarist since age six and is a veteran musician of the L.A. music scene. She got her start taking lessons from the legendary guitarist Randy Rhoads. In high school, she joined the all-female band Precious Metal in the 80’s and went on to be signed by Polygram Records and Capitol Records. As a solo artist, she has released six CDs as a singer/songwriter and guitarist. Her latest CD, “Take Me As I Am” was produced by John Carter Cash (Johnny & June’s son) and Chuck Turner, and was recorded at Cash Cabin Studios in Nashville.  She is also a dedicated and well respected guitar coach and has given several master guitar classes on the road and online. In 2015, she was asked to teach actress Jennifer Jason Leigh guitar for a scene in Quentin Tarantino’s “Hateful Eight” movie. The actress was subsequently nominated for an Academy Award for that role. Janet tours worldwide as a solo artist and is also a member of the instrumental all guitar band, The String Revolution, managed by Miles Copeland. TSR currently has over 4 million Spotify plays. Earlier this year the trio released a unique version of “Crazy Train” featuring Steve Stevens (Billy Idol) to rave reviews, and their version was recently added to full rotation on SiriusXM’s Instrumental Channel.  www.janetrobin.com.