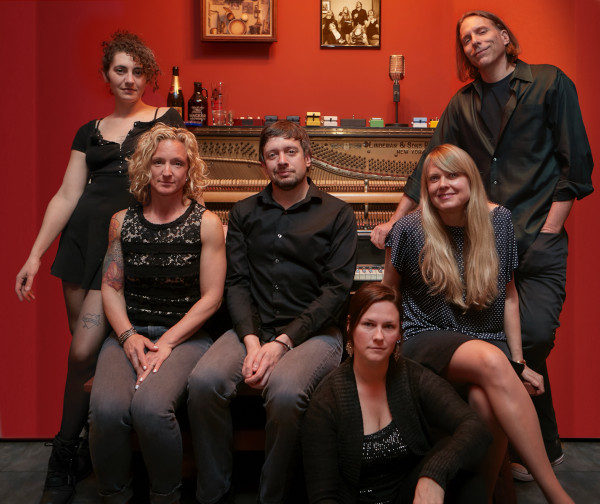 END_OF_DOCUMENT_TOKEN_TO_BE_REPLACED

Dimestore Dolls frontwoman Kelly Buchanan has faced unimaginable obstacles, but she has not only overcome them, she has turned them into a strength, using them as inspiration for her music. “My entire life is a part of my career,” she says. “Music plays a huge role in that, and is how I give back to the world.”

A singer-songwriter in the riot grrrl vein, Buchanan’s 2005 solo album, Bastard Daughter, earned much critical praise, national distribution, and an opening slot touring with Mike Doughty. Her songs were featured in TV shows on various networks, including MTV, A&E, and The CW.

But tragedy struck in 2008, just as Buchanan was about to release her next album, Kelly Buchanan. Living in New York City, she joined an impromptu game of street hockey – and suffered a traumatic brain injury when she took a slapshot directly to the head. The damage was so severe that she had to re-learn how to walk, and also overcome difficulty with speaking. It took years more for her to rebuild all her other skills, including singing and playing instruments.

It took Buchanan a decade to make a full recovery from her injury and return to her music career, but this wasn’t the first time she’s had to show remarkable strength and tenacity. After graduating from high school, she studied abroad in South America – but a relative of her host family had criminal ties, which lead to her being held captive and on the brink of being sold into a sex trafficking ring. Using quick wits, and her fluency in Spanish and French, she escaped her captors and eventually make her way back to the U.S.

While Buchanan admits that this experience has had a profound influence on the music she has subsequently written, she makes an effort not to dwell on it too much. Instead, she prefers to focus on how this situation helped her discover what she should actually be doing with her life. “That whole thing made me reconsider my priorities,” she says. “I realized I didn’t really want to travel around the world and work in foreign embassies in third world countries. When I got back to America, I said, ‘You know what? I’d rather do music – there is more than one way to make a positive impact in the world.’”

Buchanan enrolled at the prestigious Berklee College of Music in Boston. Majoring in Professional Music, she intensively studied music business practices and performance skills, as well as taking extensive coursework in voice and guitar.

Making this switch came easily for Buchanan because she had always been immersed in music. Growing up in a musical family in Hershey, Pennsylvania. Her father was a serious pianist, and she followed suit, starting piano lessons when she was three years old. She got her first guitar from her grandparents, who were professional musicians, and she soon formed a group with her cousins. Next, she become inspired by an eclectic mix of rock music ranging from The Pixies to Led Zeppelin and the Indigo Girls. This laid the foundation for the diverse music that she now writes herself. While studying abroad in France in high school, she fronted a rock band for the first time.

Buchanan’s father passed away when she was eleven years old, prompting her to write her first songs as a way to cope with her grief. “I write in emotional times. A lot of songs that I write are pretty intense,” she says. After her subsequent life challenges, Buchanan was again reminded of the importance of pouring her emotions into songs as a healthy outlet. “Music that soothes me when I’m not feeling my best, and uplifts me when I need that, is what I like the most. I like music that’s fun and intense at the same time.”

As the main songwriter for Dimestore Dolls, Buchanan brings material to the other members, which they then turn into their distinctive, highly varied sound. Their widely differing backgrounds add to this originality. While Buchanan has been heavily involved in playing music her whole life, Christy Engel didn’t start playing drums until she reached adulthood. Chris Whalen played in bands years ago but had gone on hiatus, only to rediscover his love for playing and performing again after joining this group. Scott Frenchek has been performing for years, but has found immense inspiration in being allowed to experiment with a vast array of different sounds in Dimestore Dolls.  Jeanette Stillman fronts her own band and Mollie Swartz plays in folk-punk group Apes of the State.

Beyond Dimestore Dolls, Buchanan is heavily involved in making a positive impact through music by frequently organizing benefit concerts for various causes. A passionate music teacher, she formed her own non-profit organization, MusiCorps, which pairs schoolchildren with music instructors for free lessons in Lancaster, Pennsylvania, where Buchanan lives. (For more info about MusicCorps, go here: musicorps.net)

Initially moving to the Lancaster, Pennsylvania area after her brain injury so her parents could help her as she recovered, Buchanan has remained there ever since, finding that it is an ideal place as she has resumed her musical career. “Being in Lancaster has led me to feel more confident in exploring my instruments and taking risks in my music – I think it’s made me a better musician,” she says.

As she continues to refine her craft, Buchanan is grateful to get another chance to do what she loves best, and determined to make the most of it. “It feels like I’ve made a full recovery,” she says. “There was a moment when I couldn’t walk or talk, and it felt like it was the end of my life, but it wasn’t. I kept pushing through it because there is no other choice. It was either get up every day and do physical therapy and work really hard – or just give up. I choose to survive.”